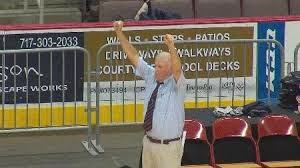 Coach, as he was known by many, was my high school basketball coach, starting way back in 1989 when he came to Gettysburg High School to restore a proud program.

In the 24+ years since then he's been so much more.

There isn't just one thing that I can point to and say "Coach did this for me." But during those 24 years there were so many things, that I'm eternally grateful.

He was full of energy, passion, forever optimistic and as loyal as an individual can be. Characteristics that rubbed off on the people around him. I'm hoping they rubbed off of me.

He was always the guy that you could lean on. The guy who knew what to say - when it seemed like there wasn't anything to say that could make it better. But Coach always did.

In High School when we lost (and man did we lose), he found a way to tell us how we were going to get up in the morning, go to class and come to practice and get better. And that it would be better.

I know he's done the same for many of my teammates, many of the other kids he coached, many of the students he's taught, or anyone he's come in contact with who needed an extra lift. He genuinely cared for every person he came in contact with. He's helped make this great community stronger.

But our matches were competitive. Because anything with Coach was. And the truth be told, I was a better golfer than he was. But he was bound and determined to beat me. And I'll never forget the first time he did.

It was the day after Christmas. My clubs were away for the season. But it was unseasonably warm, you know like up in the forties, and Coach thought it was a good day to play golf. Or maybe he thought it was as good a day as any to finally beat me. So he called and asked if I wanted to go play. I looked out the window and wasn't real sure it was a good idea. But I went. And headed to the 18th tee I clutched, with frozen fingers, to a one-stroke lead. He made par, I made bogey. The perfect way to end. Let's head inside for a drink to warm us up, I thought. He had other ideas. "Can't end tied," he said. "Let's play another hole."

And so we did. He won of course.

I've got lots of memories similar to that. Lots of happy times with Coach through the year. We've laughed and cried together. Argued about presidential elections and BCS bids - all the important things.

Earlier, I said we lost a lot in high school. We only won 12 games in the two years I played on his team at Gettysburg. Only three in that first season at Gettysburg. A season where he promised us we were building the foundation for a program that would have success in the future. And it did. League championships were in the program's future. But I never realized how important those three wins were. Jim Dooley's career, unbeknownst to everyone, came to a close last March in the PIAA Tournament. The final tally: 702 wins in that great coaching career.

However, that number should never define who he was or what he accomplished.

There are no numbers for that.

Send an email to thefanblog@gmail.com
Posted by TheFanBlog at 12:45 PM