Thanks for the Memories: #23 Julian Norfleet

The truth is, I would have never expected to feel that way when I first saw Norfleet play back in the early winter of 2009. I never anticipated that Norfleet would walk off of campus as one of the best players in Mount history. Nor did I anticipate that he'd be the guy who grabbed my respect as a complete basketball player more than possibly any other in Mount history. 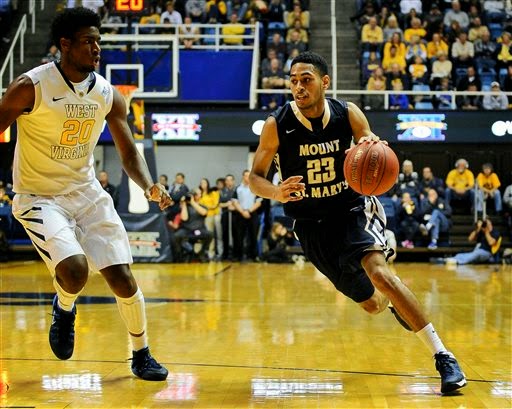 What transformed in four years at the Mount is truly remarkable. And Norfleet deserves the credit.

Based on a desire to never lose, Norfleet, by all accounts, is the hardest working guy in Memorial or any gym around. And based on that same desire to win, he's willing to sacrifice his own personal gain for the gain of the team.

I remember Head Coach Jamion Christian telling me how important it was that in early part of the 2012-13 season that Norfleet was willing to sacrifice his own offensive game and scoring opportunities to make sure that others got theirs and the team got better.

Still, I don't think anything changed my appreciation and respect for Norfleet more than the new role he took on after Josh Castellanos rolled an ankle in January of 2013. The Shivaughn Wiggins Point Guard Era lasted about 4 minutes and 10 turnovers versus Monmouth on a cold winter's night at Knott Arena and it looked really bad for the Mount.

Enter Norfleet as the lead guard. The glorious run that Mount basketball went on over the next 14 months really started right there. Norfleet with the ball in his hands became the catalyst.

He still scored, but the others around him did as well. And he became exactly what every coach wants in a player, "the one who makes the other's around him better."

That may have never been more evident when the Mount blitzed Norfolk State in January. Norfleet, playing in his hometown with a contingent of family and friends on hand, turned in a truly remarkable 31 point 10 assist performance, that ranks as one of the greatest individual performances I've ever seen from a Mountaineer.

When Norfleet was only chosen to the second team All-NEC after averaging 17.2 points and 5.5 assists and being the glue that held things together for the Mount during his senior season, I was mad. I'm still mad, but as I mulled over my thoughts to write this piece, I realized that the guys who voted on those awards didn't have what I had. The ability to watch Norfleet play every night and see just how special and how important he was. What a pleasure that was.

Norfleet leaves the Mount with 1605 points, 423 assists, 378 rebounds and 153 steals in a career that saw him start 125 of the 126 games he played in. But what he has left is so much more. He's set the standard high, shown players how to work, and raised the level of excellence expected from the Mount.

Three claps for you Julian Norfleet. You've earned my respect and given my family and I  great Mount memories. All the best in your professional career.

Send an email to thefanblog@gmail.com
Posted by TheFanBlog at 4:40 PM