Thanks for the Memories: #22 Rashad Whack

This is just a simple recollection of the two years that Rashad Whack spent playing for Mt. St. Mary's, written by a simple fan who enjoys going to the games and particularly enjoyed watching Whack play the last two years.

If it were more than that, say a highlight film set to music of those two years, this blogger would lay the track Happy behind the video. Because #22 always seemed Happy to be on the basketball floor. And let's be honest as Mount fans we were happy that he was there. Somewhere along the way, I'd include that soaring left handed dunk (maybe two or three times). But this is just a simple recollection, So Clap along as I run back through what were two tremendously exciting years from Whack. 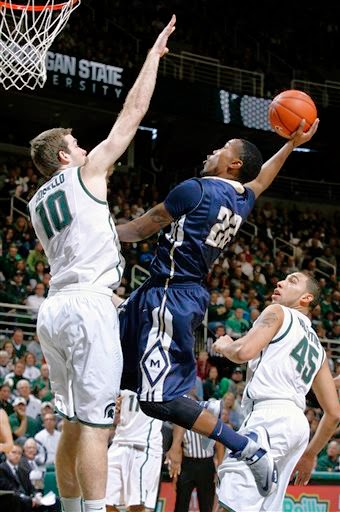 There were plenty of great offensive moments from Whack, who led the Mayhem attack in scoring in both years at the Mount. The 35-point performance versus Sacred Heart when he made 7 of 10 3 pointers, including all 5 of his attempts in a 23-point first half. The 26-point performance in 2013's NEC Tournament win at Robert Morris. The 20-point win in the NEC Final the following year in the same building.

All of that allowed Whack to become a 1000 point scorer in essentially just two years of college play. Whack scored just 49 points at George Mason before coming to the Emmitsburg campus. So if all we remembered Rashad Whack for was his unique ability to score the basketball we couldn't really be faulted.

But Whack - and his contribution to Mayhem was so much more than that. He made us as fans, believe, that Mayhem could and would be a successful way to win basketball games. During the first 7 games of his Mount career he averaged 3 steals a game as the Mount won 4 of the first 7 games in the Mayhem Era. And during that 7 game stretch he matched the 3 steals per outing with 3 3's per night to firmly put a stamp on what the Mount was now about.

And it was that style and his play that had a lot to do with 2 straight trips to the NEC Championship game that culminated in an NEC Championship and the ensuing NCAA tournament appearance.

Whack didn't make all his threes. In fact, there were nights where he missed more than he made. But from wherever I was, in the blue seats, in the bleachers, at Bryce Jordan Center, in front of the TV, or watching on this same laptop that I now type, I always felt when Rashad rose and fired, the ball was going in.

Nothing could prove that point more than the Quarterfinal win at Knott Arena this past year. Whack's three-pointer was the game-winner and what had been a tough shooting night turned joyous. Because on that night Whack did whatever was necessary to win. When the outside shots weren't falling he drove hard to the basket, earning free throw after free throw. He made 10-of-12, including the 'and one' of a three-point play that fueled a ridiculous rally for the Mount.

And still none of that was what Whack did best. Rashad Whack was absolutely the best defender in the Northeast Conference the past two years. That Kenneth Ortiz won the NEC Defensive player of the Year is a joke. As far as postseason awards go, it's a crime of the highest degree.

You want proof of Whack's performance. All you need to do is look at his effort against League MVP Karvel Anderson. Nobody in the NEC could stop Anderson. He averaged 23.4 points per conference game when Whack wasn't guarding him. In three games against the Mount, Anderson scored just 41 points, many coming when the Mount was forced to foul late in the 2 regular season losses, others coming after the champion had been determined. Anderson scored 38 in the first round of the NIT against the Big East's St. John's.

And those efforts by Whack against Anderson were nothing more than Whack deciding that he wasn't going to let Anderson score. He blanketed him, and the top scorers for many other teams. Ultimately, it was that defense that had been so maligned for so much of the season, that led the Mount to the championship and Whack was the heart of it.

I wish we'd have gotten to spend more time with Rashad Whack, wish we'd have seen more of him and his abilities. But I'll never forget the effort he gave every single night and the smile that came with it.

Three claps for Rashad Whack on a job well done. All the best in wherever you land next. We'll be rooting for you.

Send an email to thefanblog@gmail.com
Posted by TheFanBlog at 12:41 PM