Search for the Missing FHM Latvia 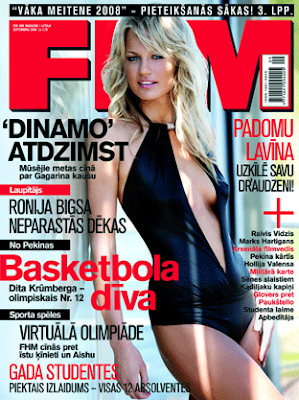 For a long time on the Fan Blog, there have been searches looking for Dita Krumberga, the former Mount player, and the Latvian Olympic player and her apparent appearance in FHM Latvia. We've noticed that those searches have increased again recently, forcing us to go back to work. We found the September 2008 cover of FHM Latvia online. Now our Latvian isn't very good, and Google Translate doesn't translate the magazine cover, but we're are fairly certain that Basketbola diva, Dita Krumberga Olimpiskais Nr 12....translates to something like basketball Diva, Dita Krumberga Olympian #12. We'll even be 100% honest and tell you were not even sure in that is Krumberga on the cover, we can't tell without the pony tail. But it came down to the fact that we really didn't care.
Posted by TheFanBlog at 7:37 PM