View From My Couch Friday Night

Written for your enjoyment by: Raff

Been awhile since I did a view from my couch, but Curtis Granderson was just so safe that I had to say something. And remember I'm the Yankee hater. Watching both Game six of the ALCS and the Big East Friday Night Game of the Week on ESPN2. It's that inept USF offense at defending champ Cincinnati. I'll keep you posted with thoughts as the night wears on.

Who scores more tonight the Yankees and Rangers or USF? Would you take just one of the Yankees or Rangers over the Bulls? I think you need them both. But the USF defense is not bad. And they just stopped UC after a 1st and Goal situation and forced a field goal. So a little bit more than midway through the first, the Bearcats lead 3-0.

Is that pitch tracker thing from TBS ever right? Or are the Umps just that bad? I think its the TBS technology. It never really even seems all that close. Ron Washington draws first blood by putting Josh Hamilton in motion. It kept them out of the double play. Anybody got any of those old Donruss cards of Ron Washington? The guy looks so much the same, doesn't he? 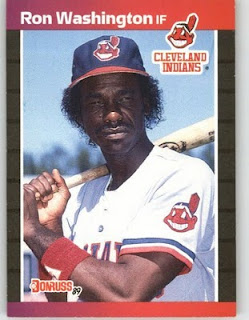 South Florida has looked a little bit different on this drive. They've let BJ Daniels do what he is good at and that is give him options with the football and run a little bit. Plus when they were faced with third and one, Skip went to father Lou's playbook and went to the full house backfield. Even without Jerome Bettis in the backfield, the Bulls got the first down. After one though its still 3-0.
Daniels ends up scoring on a QB Draw. So USF leads 7-3 and my guess is you're going to need both baseball teams to outscore them. Colby Lewis has shutout the Yanks through 2 but it hasn't been as easy as it looks. We'll see how it goes from here. And by the way, Ron Washington hit .261 in 1586 at-bats over 10 major league seasons.
Love the Wild Pitch on the Intentional Pass to Hamilton. Almost like a balk on the catcher. Well not a balk on the catcher, but a balk on the pitcher for throwing when the catcher isn't in the catching box. The wild pitch probably didn't matter, but it did make the crowd a bit more loud.
Posted by TheFanBlog at 8:21 PM