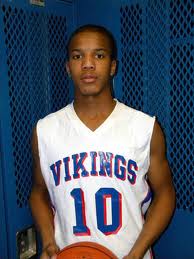 Wiggins a 5-10 guard for 4A North Mecklenburg averaged 25 points, 5 assists and 3 steals a game while being named the I-MECK Player of the Year.

Wiggins shot better than 50% from the floor and 33% from three-point land for his team. He made 77% of his free throws and gets to the line frequently with his tremendous quickness.

Here is a writeup on the next guard to the wear the Blue and White from phenomhoopreport.com

"Coach Duane Lewis of North Mecklenburg High School in Huntersville, North Carolina is one of the best high school basketball coaches in the state. He has produced many D1 prospects at every level and this year is no exception with his senior PG Shivaughn Wiggins. Wiggins is enjoying an outstanding start to the season. After a solid junior season where Wiggins averaged 13.3 PPG, 7.3 APG, and 3.4 steals per game, he is now playing the role of a scoring PG and a good one at that. Currently, Wiggins is averaging 25 PPG and 6.5 APG and over 3 steals per game. These statistics are outstanding for the level of competition he is playing. North Mecklenburg HS is in the 4A classification for the state of North Carolina.  Wiggins plays with a confidence that is second to none. He is a fierce competitor and will not back down from a challenge. He is an excellent on the ball defender and has quick hands and feet. He has a solid foundation of team defense and anticipates nicely for steals. On the offensive end of the court, he is an outstanding ball handler. He dribbles with a low stance and has his head always up looking for the next pass to an open teammate. He has an uncanny ability to see a play one step ahead and his advanced ball handling skills makes him one difficult player to defend. He has good ball speed and quickness and utilizes the hesitation move effectively to keep defenders off balance. He changes speed extremely well and has the ability to create his own shot off the dribble. Wiggins sports a nice mid range pull up jumper and has perfected the tear drop floater in the lane. Without question, Wiggins is a PG D1 schools should take a hard long look at, especially in the North Carolina area. If not, we will be reading about another player that was “snatched” away from his own back yard. "
Wiggins is expected to sign during the extended signing period which starts next week.

Prep Insiders reports on his commitment

Send an email to thefanblog@gmail.com
Posted by TheFanBlog at 9:33 AM