Thanks for the Memories: #3 Sam Prescott

I will never forget Valentine's Day night of 2013.

I got in a lot of trouble that night. I chose the Mount game over dinner with my wife.

Sam Prescott made sure that was a wise decision. 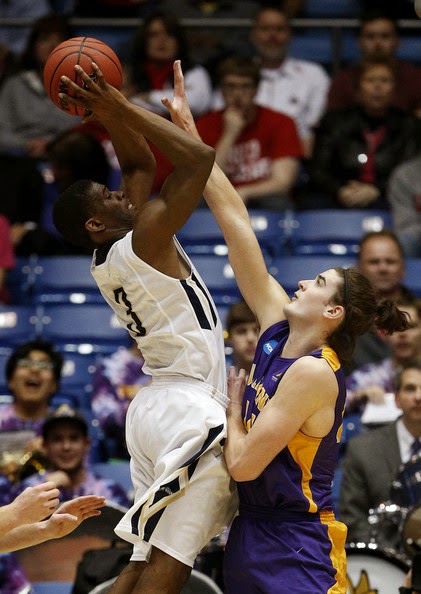 At the time a junior, and having broken into the starting lineup only a few weeks prior, he singed the Bryant defense for 44 points knocking down 10 three-pointers on the evening. As far as individual performances at Knott Arena there are few, if any, better. Certainly much better than the steak or crab cake that the other option provided.

But that wasn't the only lasting image I'll have of Prescott. Etched in my mind, and the nightmares of Robert Morris fans everywhere, will be Prescott sitting comfortably in the middle of the Colonial zone, just past the foul line making the proper decision each and every time, either knocking down the 16-foot jumper if nobody stepped forward, or kicking to the wing, the corner or to the baseline depending upon where the help defense came from.

Maybe it was the 2 final second jumpers during his senior season that you'll recall when you think of Prescott's time at the Mount. They were both incredibly memorable shots. The three against Long Island with .3 second left capped about as frantic a final minute (sans SFNY quarterfinal win) of basketball you can have. Or maybe his three to force an extra session of basketball against Fairleigh Dickinson just two nights before was what stands out.

And don't forget the double-double against St. Francis U on Senior Day. He lit up the scoreboard in the second half and then got his 10th rebound just seconds before leaving to a strong ovation.

Or perhaps, you go the whole way back. Back to your first look of Prescott. Mine was the Blue-White game in 2011, during the year he had to sit out because of NCAA transfer rules. He electrified that day. Passed the look test in every way, and as a great basketball mind told me that day, "He excites you".

The fact is Sam Prescott could of scored a lot more points than the 11.1 he averaged with the Mount these past two seasons. Or he could have had a lot more than the 1000+ he totaled in his collegiate career which began with 2 seasons at Marist.

But that wasn't Prescott's role within this team and this system. And he bought into it. Bought in hard and did the things that were necessary to make this team everything it has been the last two seasons. Whether that was matching up against much bigger players on the defensive end and trying (successfully on many occasions) to keep them off the offensive boards, or going out front and guarding the lead guard. Or running through the offense and setting the screens and taking the defense away from the point attack. Prescott did it, and all along with a smile on his face.

There were plenty of individual moments and achievement in Prescott's career and those images will stick. But it was his unselfishness that I'll remember best.

This Mt. St. Mary's program is about to get good. Real good. Sam Prescott's days on the floor are over, but his days as a pillar of this program will never end.

Three claps for you, Sam, on a job well done. Thanks for the memories, and the dedication, they will not be forgotten.

Send an email to thefanblog@gmail.com
Posted by TheFanBlog at 2:44 PM