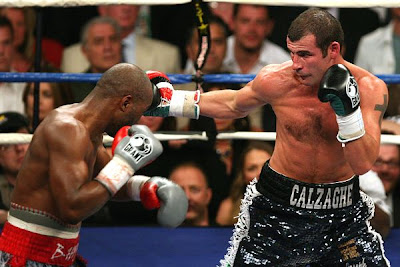 After losing a Split Decision to Joe Calzaghe, Bernard Hopkins says the fan's really decide who wins a boxing match.

And that the fans know exactly who won this fight. And that is wasn't the same person that the judges determined was the victor.

Certainly it's true that Hopkins demonstrated why he was such a great champion and he made Calzaghe work hard to remain undefeated.

But Calzaghe hit Hopkins more times than Hopkins had ever been hit and after the third round of the fight he seemed to control things. So in the eyes of this fan, and I think in the eyes of many, the judges got the decision right. I had the scorecard 116-111. I gave 9 rounds to Calzaghe and 3 to Hopkins and Hopkins got an extra point for knocking Calzaghe to the canvas just short of the bell in the first. It was a clean knockdown. But not the type of knockdown that really hurt Calzaghe. Hopkins came close to knocking Calzaghe off his feet later in the fight, I believe it was round nine, but Calzaghe survived. In the end, the Welshman hit Hopkins almost 100 times more. And even though none of those punches ever seemed to hurt Hopkins the cumulative effect was more than enough.

Hopkins gave a valiant effort. And truly I think he executed his gameplan to near perfection. The problem for Hopkins was that Calzaghe adjusted to Hopkins' plan and dodged and blocked the right hand that had caused some problems for him early in the fight. Consequently, even though Hopkins may have been throwing the bigger punches, he was throwing far to few of them.

Even the fans had to recognize that. This one did.
Posted by TheFanBlog at 8:35 PM