Thanks for the Memories....Chris Vann 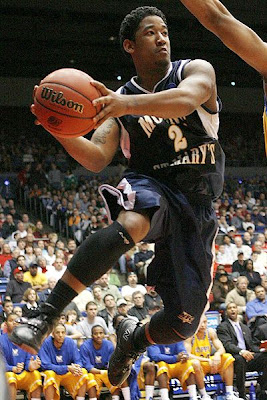 I'll never forget the first conversation that I had with Mt. St. Mary's head coach Milan Brown about Chris Vann. At the time, Brown was working through preseason practice and headed towards his first game as head coach. He told me I was going to love Chris Vann.

I'm not sure I ever fell in love with the sharpshooter from Gar Field High. But over time, I did gain a respect for Vann and his abilities on the basketball floor. The truth is, I don't think he was nearly as gifted as many of the players who have donned the blue and white over the years. But he sure accomplished a lot in his time at the Mount.
I think that the biggest thing that bothered me about Vann was that he played as if he was a scorer instead of as a shooter. Therefore, I think that his efficiency was clearly hampered. However, as I think back on his time as a Mountaineer I think he might have been forced into trying to be more than simply a shooter. And it was his mental toughness and his ability to keep his teammates focused on the task at hand that led to my respect.
He finished with more than 1000 points, so he certainly could score the ball a little as well. He scored 20 or better 15 times during his career. He led the Mount with 16 points in the NCAA tournament loss to North Carolina and it was great to see him finish his career on such a high note. It certainly looked like he was having fun playing the NCAA tournament and we felt good for him.
Chris Vann always represented the Mount with class and his public comments after the tragic death of classmate Dustin Bauer around the time of the NCAA tournament made me a bigger fan.
He was the team's leading scorer his junior year, and second on the team his senior year, yet it seems like the Mount may have some players who performed well down the stretch to fill in for his departure when he graduates in May. Still no matter what, Vann will be missed when practice starts again next October.
Good luck to you #2.
Posted by TheFanBlog at 7:29 PM