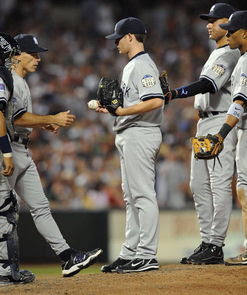 ....to goto the Yard. Made my first live showing at Camden Yards last night. I was seated about 288 rows behind Cal Ripken, but I enjoyed it just as much. Going to a ballgame and being able to watch everything that is going on.

....to beat the Yankees. And the more I look at this Yankee team, the more I'm not convinced they are not very good. And as usual, I think its the pitching. The Yankees have things taken care of at the back end of the bullpen, Chamberlain and Rivera will serve the purpose that is necessary. Rivera isn't what he once was, but he'll get the job done. I've watched Phil Hughes last three starts, I saw him in person two years ago at Trenton and I saw him live at the Stadium last year. I believe he has good stuff, I believe he will be a very good major league pitcher someday. But I'm not convinced he's ready to consistently get major league lineups out for seven innings every fifth day.

With that said, what I saw from Ian Kennedy last night, he isn't ready for the major leagues. He's not an overpowering type. Nobody expects that he ever will be. But he needs to have command and throw the ball where he wants to. Otherwise teams are going to hit him around. Last night, he threw 60 pitches in the first two innings. The Orioles had managed only one run, after running themselves out of a rally in the second inning. But when he can't ahead in the count he is incredibly hittable. And with that said he is going to struggle. Which it doesn't take a rocket scientist to figure out as his ERA nears 10.00.

The rest of the Yankees rotation consists of seasoned veterans Mike Mussina, Andy Pettitte and the growing ace Chien-Ming Wang. Those guys will do enough allow a declining Yankee lineup the opportunity to win more than they lose. But it is a declining and aging lineup and there doesn't seem to be much help on the way. Although, both Melky Cabrera and Robinson Cano are youngsters who have moved into the starting linuep, you have to wonder if either will ever become an All-Star at this level. Cabrera's best asset is his defense and Cano has struggled mightily after seeing his average plummet 36 points last season.

They just spent 5-10 minutes talking about the AL and its depth and competitiveness on ESPN's The Sports Reporters. There is a lot of it, and its quite possible that the Yanks, who haven't missed the playoffs since 1993, but haven't won the series in seven years and have become the Atlanta Braves or the Buffalo Bills of the 2000's, might not even get to the postseason this year.

Sure its April, and sure we're just approaching the three-mile mark of the marathon. But the Yanks have a lot of questions. A lot that there may not be answers for, and it very well could be a very disappointing summer in the final one at the Stadium.
Posted by TheFanBlog at 10:05 AM