How big is today? 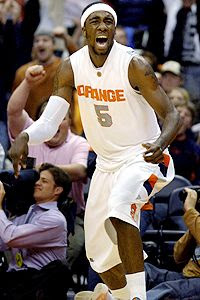 For the Syracuse Orangemen it really doesn't get any bigger.

They need to do something where the committee has a good feeling about them. Because I don't think the committee wants to put 8 teams from the Big East in the field. Therefore, even though 20 wins isn't a guarantee, Syracuse almost has to get there. And winning today gives them the opportunity to get there. Or at least the easiest opportunity. It also gets people saying good things about this team again.

A run into the Big East Tournament semifinals would probably also accomplish the same feat. However, the task is easier today. You have a conference opponent on your home floor on senior day. Are there any seniors to be honored? So let's just call it Donte Day.

A win today and the mock brackets will have the Orange in the field tomorrow. They are that close at the moment. But most importantly a win today gives the Orange the best chance at having its name called in the real bracket next weekend.

Posted by TheFanBlog at 8:33 AM