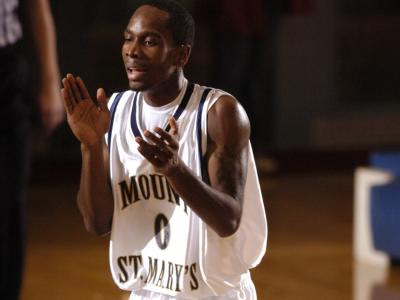 The regular season is complete. Robert Morris wears the crown as the NEC regular season champion. That means nothing (other than an NIT bid) should the Colonials falter in one of the NEC Tournament games.

Not every team participates in the Northeast postseason tournament. Banished are the two St. Francis' although (PA) was one of two teams to beat the Colonials and Fairleigh-Dickinson - and the one-two scoring punch of Manny Ubilla and Sean Baptiste.

So now we are left with four first round matchups all played on the higher seed's home floor. The NEC does not have a true tourney bracket and will reshuffle with the top remaining seed playing the lowest remaining seed after one round.

Here are the first round matchups, all scheduled for Thursday evening.

Monmouth #8 (4-14, 7-23) at Robert Morris #1 (16-2, 25-6) - The Colonials enter on the strength of a school record 13 game winning streak. Its last lost was way back on January 13th. If you witnessed NEC basketball this season it is clear that the Colonials are the most polished teams at both ends of the floor. Two seniors Tony Lee and AJ Jackson combine with junior Jeremy Chappell to form a big source of the Colonials production. Lee has had multiple triple-doubles down the stretch. This game is really about the Colonials and whether they continue to play well. The Hawks haven't beaten a team in the field and backed in after falling 81-68 at Mt. St. Mary's on Saturday night, when Manny Ubilla's three-pointer at the Overtime buzzer eliminated the Red Flash of St. Francis (PA). It's the playoffs so anything can happen, but anything short of a rout would be a surprise.

Long Island #7 (7-11, 15-14) at Wagner #2 (15-3, 22-7) - The Blackbirds have spelled trouble for the Seahawks all season. LIU handled Wagner in Brooklyn, the Seahawks first conference loss, early in the year and then nearly won in the return trip to Wagner. The Hawks are coached by NCAA veteran Mike Deane, who has taken three NCAA teams to the Big Dance including Siena, Marquette and Lamar. He hopes to make the Hawks the fourth. Wagner is led by guard Mark Porter, averages 16.2 per night and Durell Vinson who checks in with just over 13. The Blackbirds Jaytornahh Wisseh leads his team with 15 points per night. Nothing I have seen this year would indicate that LIU could surprise. But those two previous results make them tough to ignore.

Central Connecticut State #6 (10-8, 14-15) at Sacred Heart #3 (13-5, 16-15) - Central just finished out the NEC regular season on Sunday afternoon with a 100-87 pasting of this same Sacred Heart team. So is that a good thing or a bad thing? We'll find that out on Thursday, when the defending champs return to Fairfield for another shot at the Pioneers. These two teams played for the title last year, so they have a little tournament history going as well. It took a young Central team awhile to get going this year, but they seem to be clicking on all cylinders late in the year. Sacred Heart was the preseason pick by many to win this conference, so they can't be taken lightly. If I was picking before Sunday, I probably would have taken Central, but that result troubles me. Not sure they can win twice in 5 days in the opponents building. One thing is for sure, Howie will outcoach them.

Quinnipiac #5 (11-7, 15-14) at Mt. St. Mary's #4 (11-7, 15-14) - The only thing seperating these teams and giving the Mount the homecourt advantage was a Mountie 60-59 win over Central way back on December 8th. Quinnipiac split with the Devils, thereby giving the Mount homecourt. The Mount returns from Spring Break today, so the Maniac section could be in full force. If they even remember what that is. Two teams split a pair of games this year, each losing on the opposition's court. MSM lost at Quinnipiac when the Bobcats were playing well and the Mount wasn't. QU returned the favor in Emmitsburg a few Saturdays ago, when the Mount was gaining momentum and the Bobcats were struggling. Freshman guard Jean Cajou has scorched the nets during the final six games that saw the Mount win five times, only losing by three at RMU. Cajou shot 73% during the six games, including 12-of-17 from behind the arc. Quinnipiac is led by the league's leading scorer Demario Anderson. The senior had 21 in the Bobcat win in January. The Mount is playing well right now, and QU seems to be struggling to some extent, finishing with 5 losses in 8 games including that one in Emmitsburg. Plus if the Mount wins, I'll be more apt to want to write the semifinal previews. So take them for a variety of reasons.