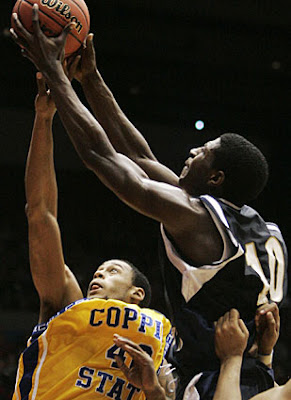 The Big Day is upon us. The wait is over. The game is about to begin. The challenge is monumental.

What's at Stake?: The simple answer is this... a berth in the second round of the NCAA tournament. But we know it's more than that. For the Mount, it's a chance to gain instaneous national recognition and produce a tournament memory that will be replayed for so many years to come. For the Heels, it's game one on what is supposed to be a six-game trek to a championship.

Where are the proceedings?: The game is being played in the Tar Heels backyard in Raleigh, North Carolina at the RBC Center. The game is part of CBS' regional broadcast tonight, but will not be broadcast by the Harrisburg affialiate WHP-TV. For those of you in the rest of the country, check your local listings. Other options include NCAA.com streaming video or Mega March Madness PPV package on DIRECTv or of course your favorite local watering hole, maybe carrying the game.

How did we get here?: The Mount qualifed for the NCAA tournament by winning the NEC tournament just over a week ago at Sacred Heart. Then the Mount defeated Coppin State in the NCAA Tournament Opening Round game Tuesday night in Dayton. The Mounties have won 9 of their last ten games. Carolina officially qualifed for the tournament by winning the ACC Tournament last Sunday in Charlotte with a win over Clemson. However, being recognized as the top team in the top team in the land probably didn't hurt their at-large chances.

The Analysis: The odds facing the Mountaineers tonight are extremely large. No #1 seed has ever fallen in the NCAA's first round, since the field was expanded to 64. It's a lot of games. The Mount has twice lost in the first round as a #16 seed. The Las Vegas line has North Carolina favored by 25 points.

Advantages for North Carolina: Oh, where to begin. If we just go back to the legendary head coach Jim Phelan's comments before his Mountaineers played Kentucky in the NCAA first round in 1995, we probably have it best summarized. At the NCAA press conference that week, Phelan said something along the lines of "Well Kentucky has 12 McDonald's All-Americans, and I have 12 guys who eat at McDonald's." Substitute North Carolina for Kentucky and you've got the story. Or you can reflect back on Milan Brown's interview with Erin Andrews after the Coppin State win (and try to actually listen to what the good coach said), "He (Roy Williams) probably has a few more bullets in the holster than I do." Yeah, probably. Plus in this neutral site game there might be more Carolina Blue than Mountaineer Blue in the stands. Commute time from the Chapel Hill campus to the Arena is about 36 minutes per Mapquest.

Advantages for Mt. St. Mary's: This paragraph might not be as long. The Mount is playing well, and might not really be a typical #16 seed. Because, it is still my belief that this Mountaineer team with this group of players playing this style of offense would have won three or four more games during the regular season. So if you'd shift them from 18-14 to 22-10, it might have been enough to get them a #15 seed. Let's remember that the Mountaineers did beat #13 seeded Winthrop and #15 UMBC (although that was a preseason scrimmage). So, maybe they are better than most #16's. But they said that about Portland State yesterday and that didn't really work out very well.

What to Expect: I don't think the Mount will have an answer for Tyler Hansborough. The A-A is too big and strong inside. It could lead to foul trouble for the Mount's interior trio and that could make things worse. The other question is how the UNC athletes of bigger size will defend the Mount on the perimiter. The Mount played two BCS teams this year (Oklahoma and Oregon) and when the big schools wanted to clamp down the defense they did and went on big runs to essentially win the game. In the end, Carolina is too good. This great run for the Mount most likely ends tonight. I'm a homer, so I'm going to keep it semi-close and say 80-64 Carolina Blue.

Stuff only the FanBlog can bring you: I recall the last time the Mount played on March 21. It was in 1981 and it was for the National Championship. I turned 8 that day and the Mount battled Florida Southern in Springfield, Massachusetts for the Division II title. In the end, the Mocassins won 62-57 and I cried and cried and cried. That was the first year that I really became a Mount fan. I don't think they've played on my birthday since, and although I'd love a win as a gift, the fact that this team has accomplished so much already is a gift enough.

I think the Mount is 1-0 against the reigning ACC champs. You may recall Jeff Balistrere's layin at the OMNI to beat Georgia Tech several years ago when the Jackets wore the crown.

Connect the dots and holding out hope. The Mount beat Robert Morris in the NEC playoffs handily. Robert Morris lost by six in the NIT to Syracuse. Syracuse throttled Maryland last night. Anybody remember who Carolina has lost to this year.

Tonight is a night to celebrate all things good about the Mount. I took a few classes there, and I've been a good Mount fan for a long time. Way back to my 8th birthday. But the Mount community on and off the basketball court has shown me in the last few weeks what a great community it is. The basketball team has done a great job in the public eye of representing that community, and the students and fans who have made the trips to watch the teams play have done the same to show the spirit of the Mount. I'm sort of fringe member of that community, but with everything that has gone on recently, I'm proud to say that tonight, win or lose, I'm rooting for Mt. St. Mary's.

Go Mount!
Posted by TheFanBlog at 9:39 AM