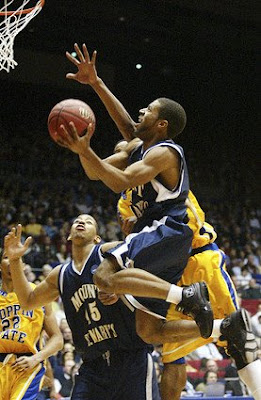 Talked to so many great Mount fans last night after the win. What a great win it was.

I still hold onto the belief that the Play-In game should be eliminated or at least modified. Two teams that win their conference tournaments shouldn't have to do anything more to get in the main bracket. But when you win, you like it a little more.

Jeremy Goode continues to impress me. He just does things that makes everyone better. Clearly he was the best player on the floor. He deserves the homecoming and the right to play against his childhood team, the North Carolina Tar Heels.

Great defensive adjustment by the Mount staff at halftime. To jump the ball up top off the screen was huge and made a big impact.

Never felt more comfortable down one at the half than I did last night. I figured Coppin wouldn't continue to play so well, wouldn't make as many shots in the second half and the score would end up close to my projected 73-61. At 69-60, I didn't miss the mark by much.

Kelly Beidler was an animal on the glass. It's easier to rebound wearing one of those big numbers. Tough to remember a kid that size with that much athletic ability wearing the dark blue and white.

Although Shawn Atupem is a little bigger and pretty athletic. That dunk was a "One Shining Moment" type dunk.

The Mount got open looks and didn't make them. First time that has happened in awhile. Big three though by Will Holland to start the second half which really set the stage for what was to come.

Heard a lot of complaints about the announcing crew. Well none about Erin Andrews. But a lot about Musberger and Lavin, because they really didn't know there was a game going on. But my thought on this was simple. They said Jim Phelan should be in the Hall of Fame. So I excuse them for everything else. We all know he should be, but it means a lot more when Lavin and Musberger say it than when I say it.

Andrews by the way is hot. She's like a 9.5 out of 10. Then she opens her mouth starts talking about sports and you realize she's a 12.

Big time announcers in Raleigh as well. Jim Nantz and Billy Packer with the call. I still haven't heard from the fine folks at the Harrisburg CBS affiliate. But they may force me to watch the game elsewhere.

Good to see Chris Vann have a great night. And a fine piece by Kyle Whelliston over at ESPN.com about Vann and his friendship with Dustin Bauer.
Posted by TheFanBlog at 1:06 PM