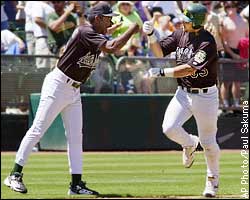 Been a slow offseason in Baltimore. But what do you expect after eight straight losing seasons. Now, one of the top targets of the offseason for the Birds has agreed to a 4-year deal. Hernandez, along with pitching coach Leo Mazzone, should help the young Orioles pitching staff.

Getting excited about the Orioles is tough at this point, but today is certainly a start.

Now the Orioles have the flexibility to move Javy Lopez if given the opportunity. Many Oriole fans think that Javy will bring a big prize in return. But seriously its tough to imagine him fetching too much in return. Lopez just turned 35 after the season, and is in the final year of his contract. He'd command something in return, but its hard to believe it would be much more than a second-tier prospect or an everyday regular without star potential. Eric Hinske's name was floated earlier today. Not saying he'll be the guy, but someone of that level might be just about right.
Posted by TheFanBlog at 8:01 PM