Goode the NEC player of the Week 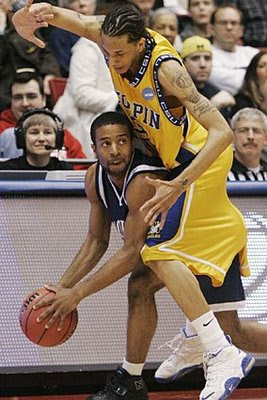 For the first time this season Jeremy Goode was picked the Choice Hotels NEC player of the week.

Goode scored 25 points in the Mount's season opening win over Loyola on Friday night. He also handed out four assists.

With his 11-point performance in Monday's loss to Virginia Tech, the junior point guard is now 9 points out of the Top 50 scorers in school history.

He is a Bob Cousy Award nominee and was named to a pair of mid-major all-American teams.

The Mount is in action again next Tuesday at George Mason.
Posted by TheFanBlog at 5:38 PM