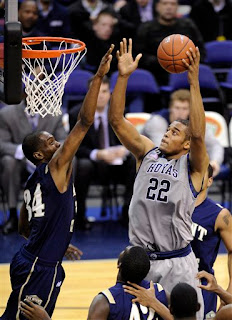 I still have high hopes for this team. Obviously, the best realistic hope for this team at this point was 4-2. Games at Oklahoma and Georgetown were going to be monumental wins if they occured. In the process, the Mount has gotten two wins on the road that couldn't be certain at the start of the season. They also split a pair of home games with a pair of teams from the MAAC, which routinely provides better power rankings than its own Northeast home. Thursday night provides the Mount the first opportunity to see where it stands within its own brethren. I think they are ready.
Posted by TheFanBlog at 8:01 AM