The Cornell Basketball Blog reported earlier that the Mount has interest in 6-0 guard TJ Curry out of New York City's Christ the King. So we did a little research on Curry and here is what we came up with. 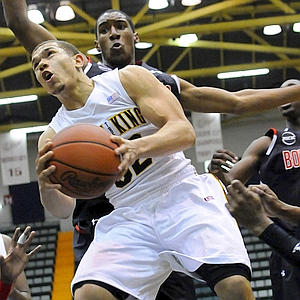 Offense: Curry is a stable combo guard while on the floor. A player that can knock down a contested three-pointer, Curry has sufficient ball-handling skills as well. The 2011 prospect has a good feel for the game. He is able to get his teammates involved in the game, especially on the fast-break. Curry has a strong upper body which is effective when attacking the hoop and going up against the opposition’s big men. While Curry’s quickness won’t result in blowing by his defender, he moves around the floor with ease. The Christ the King’s junior guard will beat his man off the dribble by using his change of speed, change of direction.

Defense: As fundamentally-sound Curry is on the offensive end, defense may be his best attribute. A player that takes pride in shutting his man down, Curry plays defense with determination, which is a rare attribute in today’s game. Seen for many possessions is a picture-perfect defensive stance, Curry uses his aggressiveness to keep his man in front of him. Curry has incredibly quick hands on the defensive side of the ball which results in steals and fast-break opportunities for his team.

Another interesting recruit to watch, it will be interesting to see where Curry lands in the next several weeks to months.
Posted by TheFanBlog at 5:55 PM