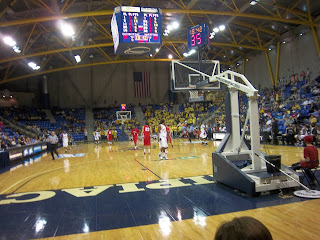 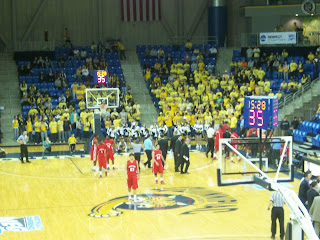 Written for your enjoyment by: Ray Curren


Quinnipiac held off Hartford 66-64 at the TD Bank North Center Tuesday night, and the preseason NEC favorites showed it at times, as they led pretty much start to finish, but had to withstand a late rally that saw the Hawks have a chance to steal the game at the buzzer. Some early-season thoughts:

* Justin Rutty is a beast inside and can rebound with anyone in the country, but he's not going to create his own offense inside.

* James Johnson (23 pts) can shoot and will score, but is not going to get to the rim in the half-court offense. Still, he looks like the team leader and went 38 minutes.

* Jamee Jackson might be the force inside to go with Rutty that Tom Moore is looking for, but (in addition to a hideous haircut), he was 0-for-4 from the free throw line with none of them hitting the rim. That's impressive.

* Point guard Deontay Twyman doesn't look like a natural for that spot and struggled (5 turnovers), especially when Hartford changed defenses (the 1-3-1 gave them fits and got Hartford back in the game).

* Local product Dominique Langston got 26 minutes and I think will be in the starting lineup before too long. He hit a huge 3 down the stretch after looking nervous for a lot of the evening, and should give the Bobcats a wing threat that can attack the rim as well.

* QU went exclusively man-to-man and never pressed, Moore likes to do his thing, I guess.

* Crowd (1,895) was good, especially for November. They did raise a regular season champion banner from last season, which even I'll admit, was pretty lame (official term).

* QU, which has a ton of home games this season (including UMass and Rhode Island somehow), hosts Vermont on Saturday. The Mount comes to Hamden on Dec. 4

* Hartford will probably struggle in America East, but their first-year coach John Gallagher is a nut. He got a technical early in the second half, and nearly got tossed a couple of times.
Posted by currenscc at 10:19 PM