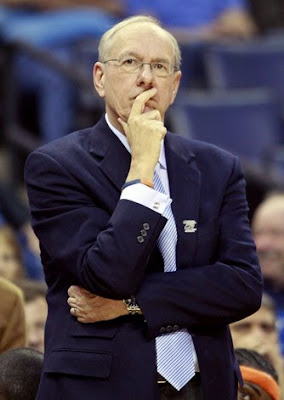 There was nothing pretty about Syracuse's season opening 75-43 pasting of in-state rival. About the only thing to really celebrate was the fact that Syracuse head coach Jim Boeheim won for the 800th time at the school. Otherwise, it was a sloppy, poorly played game.
Sort of what you might expect from an America East team and a team that lost its top three contributors to graduation a year ago in the opener on November 9th.
Somehow, I expected more.
The teams combined for 53 turnovers (21 by the Orange) and nobody ever seemed to get in any rhythm. If it wouldn't have been that Syracuse looked to run after every Albany miscue, this game could have ended up 44-43. (or worse).
There was never any really reason for the Orange to show a halfcourt offense. That was good, because I'm not sure they really brought one. At one point ESPN said the Orange had scored 46 points inside the paint, with the addition of foul shots, it meant Syracuse had 2 buckets from outside the paint at that point. I counted one maybe two (if you count Dashonte Riley's turnaround) the rest of the way. Not very pretty.
But we can dunk. Oh can we dunk. The Orange got so many easy baskets that Albany never had a chance to dream of the upset.
Still the Orange must get better production from the starting backcourt. Brandon Triche would have had a solid debut if it wasn't for 6 turnovers and three early fouls, but Andy Rautins never scored and left with an injured ankle. Scoop Jardine, who may be the key for this team (scary as that sounds), looks very much in shape, a little bit more mature, and still has the ability and the desire to score the basketball. He finished with 12 points off the bench. Another solid contibution from Kris Joseph off the bench as he chipped in 12. Both of those guys have shown signs in the past, most of those signs against lesser competition. Albany was certainly that. It will remain to be seen if they can elevate their games as the competition elevates.
We'll get another look at this team on Wednesday. Robert Morris, the defending NEC champ will make the trip. It's likely to be #801. But not if it's not prettier.
Posted by TheFanBlog at 12:07 PM