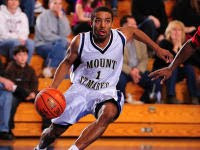 Who plays?: Mt. St. Mary's (0-0) travels to Oklahoma to take on the Sooners in the first game of the season for both squads.

What's at stake?: For small college mid-major type programs and the Mount is one, these games are affectionately known as Money games. The smaller program shows up, takes their Loss and goes home with a handsome reward. A fat paycheck. Of course, there is always that possibility that the little guy eeks out a win. There is also that matter of the friendship between the Coaches.

When is tipoff?: Saturday afternoon at 2:07pm EST.

Where is the game?: The Lloyd Noble Events Center on the campus of the University of Oklahoma. It is a Saturday afternoon in November, so be sure you specify basketball game if you're looking for the Arena. Game might not work. The Sooners play Texas A&M at 7pm, Gig 'Em boys. If you hurry, you can still get a flight out of BWI tonight and be in Oklahoma City by gametime. Delta through Atlanta, American through Dallas-Fort Worth or United through Charlotte and Chicago. The game is not available on TV. It should be available through SoonerSports.com All-Access. Although that might only be audio - and there might be a fee. You can try here in the morning. But I'm not too positive about the possibilities. WTHU-AM Thurmont 1450 will have the radio call. Steve Stofberg and The Mouth of the Mount Roy Sigler bring you the action on the Mount Radio Network. Sigler just hoping to not get tossed from his courtside seat.

The Analysis: Oklahoma lost to the eventual national champ in Memphis in the regional final last year. It's funny (or maybe not). But I was talking with a Mount fan whose opinion I value tremendously over the summer about the upcoming season for the Mount. We were talking about the schedule and he was saying how the Mount played some heavyweights in Pitt and Oklahoma. I said this might be the year to play those guys as they had both lost a lot. He said OU had the best player in the country last year. I quickly reminded him that Blake Griffin was gone as the first pick in the NBA draft. He shook his head, and said "No the best high school player". Pretty sure who was referring to Tiny Gallon, who is anything but. At 6-9 290, the freshman was a McDonald's All-American a year ago. So was fellow freshman starter Tommy-Mason Griffin. And Willie Warren, the Sooners returning leading scorer, is a preseason All-American this year.

Advantages for Mt. St. Mary's: There is no pressure on this Mountaineer team. 1345 miles (Quick - jump in the car, we can make the tip) away from home and nobody is going to expect anything from them. This is a talented team with plenty of experience. Many were along for the trip when the Mount played out here on the night of the BCS championship two seasons ago (I was at Hannah Montana) and the Mount kept things close for awhile.

Advantages for Oklahoma: The fact that the Sooners are ranked #16 in one poll and #17 in the other isn't an advantage. It's the reasons they are ranked there that provide the advantages. Willie Warren is ready to make this team his own and expand on last year's 14.6 per game. Jean Cajou, who is a great defender will get the call. But Tony Crocker (ask my Orange) can shoot it as well - and the Sooners made 13 threes in their preseason game with British Columbia. Oklahoma's size might be a factor as well, the last time the Mount made the trip, OU shot 39 free throws. The Mount, by the way, shot 7.

What to expect?: I really think that the Mount has the ability and the experience to keep this close for awhile. If you recall, the Mount played four money games a year ago (Virginia Tech, Georgetown, Penn State and George Mason) and did not embarass themselves in any. However, this Oklahoma team is probably a notch, or maybe two better than those. So the Mount must focus on improving as a team, staying healthy and trying to put a scare in the homestanding Sooners. When all else fails, get your check and head for a tailgate. There will be some good cooking going on around campus. I'm taking the Sooners 79-63.

Who are the Mt. St. Mary's Mountaineers?

Posted by TheFanBlog at 5:15 PM