If the Mount only wins two games this year..... 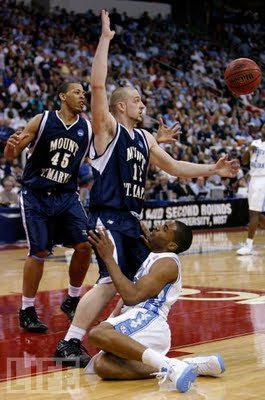 What's at stake?: This rivalry is the longest running rivalry in the state of the Maryland. So the bragging rights are on the line. Since Jimmy Patsos, the former Maryland assistant took over for the Hounds, the game has seemed to take on another dimension.

When is tipoff?: Saturday afternoon at 2:00.

Where is the game?: at the Mount's Knott Arena. The Mount is looking for all fans to show up for the afternoon tip in white. If you can't get to the game, you'll be missing out, but there will be an internet stream available at mountathletics.com. This will be a free stream, you do not need to join Mount Corner to watch. Radio coverage available on the Mount Radio Network, 1450AM WTHU.

The Analysis: The Mount has handled Loyola the last two years and leads the overall series 95-69 as the teams square off for the 165th time. The Mount has won six of the last eight in the series. Both teams have started the season winning the games you would expect and losing the ones they were supposed to. So you have to figure both enter with lots of confidence.

Advantages for Mt. St. Mary's: The win over American on Wednesday night should have done a lot to calm this team. First wins are always good to get. The Mount has been very balanced through two games and I think that provides an advantage in this game. Playing the game at home, with a senior class of Jeremy Goode, Will Holland and Kelly Beidler who want to go out a winner against the Hounds will help.

Advantages for Loyola: Jamal Barney the Baltimore schoolboy who transferred from Providence may be the best true scorer in the game. He had 21 in Loyola's win over UMBC this week, including the clinching bucket with 11 seconds left. The Mount must also contain 6-10 forward Shane Walker, who has shown an ability to knock down the open jumper.

What to expect?: Intensity and passion from the outset. The team that does the best job in harnessing that and allowing that to help their effort will have the initial success. The Mount has plenty of experience and many of the names in this series are the same that have led to Mount victories in the past. But Loyola's wins over Vermont and UMBC have been impressive and the Mount must be ready. The Mounties must maintain the high efficiency offense they had against American and try to sure things up a bit at the defensive end. Ultimately, I think they will, and start the home season off with a win, 76-68 in another good Catholic Clash.
Posted by TheFanBlog at 5:02 PM