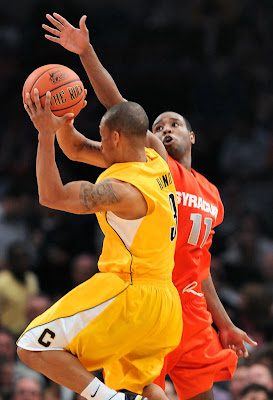 I know it's only November 19th, but that was impressive.

There are no more -- it was only Robert Morris, or any Albany isn't any good. That was a Cal team that is the preseason PAC-10 favorite.

The performance was incredibly impressive in so many ways.

Scoop Jardine has done what many thought was impossible and transformed himself into a tremendous player. He is scoring the basketball and he is getting his teammates involved. Bobby Knight said that Syracuse doesn't have the same ballhandling type guard that Jonny Flynn was. But he also said they don't miss him, nor will they, one bit. I think he is right.

And for me Jardine is the centerpiece of that. He is playing like the experience of two years ago, set in and that the time away from the game allowed him to mature and develop. His fitness level has also improved and that has to help. I'm not knocking Brandon Triche because I think he has done some really good things. But he is a freshman and is making freshman mistakes. The fact that Jardine has performed at the level he has - has allowed Triche the time to grow.

But the fact that this team shares the basketball so well is what makes them so impressive in my mind. I think they've gone three games without having the same high scorer. And maybe five games if you include the 2 preseason games - I'm not sure who the high scorer was against Cal-Los Angeles, but it might have been Jackson. But in any regard, the Orange has a lot of balance. And it's balance on the floor as well. They can go inside - and they can knock down a jumper. They can run the floor or they can play in a half court set. They can launch three-point jumpers or they can beat you off the dribble. This a talented offensive team.

A wise coach once told me, "you are never as good as you look on your best day, and never as bad as you look on your worst". Some of that needs to be remembered as we evaluate the Orange. Because chances are, they won't shoot the ball quite as well as they did against Cal in most games this season. At least not from long range. Still, I think there is enough balance offensively to offset that.

Furthermore, the defense will make the difference. You can't always count on outscoring your opponents. But you can always count on your defense. And right now Syracuse is a very good defensive basketball team. Not sure, I've seen a better one in nearly two weeks of action. They play the zone, but there are so many man-to-man principles in what they are doing, that it is still aggressive and still very difficult to attack. Plus the athleticism that they have within it is going to cause problems for all teams.

One of the frustrtations of being a Syracuse fan through the years has been that the team looks great one night and struggles the next night. A lot of that was because of the lack of reliability from the defense. So therefore, when the offense was good the team was good. But when a few jumpers rimmed out it led to tough losses. But this team has something it can count on every night. And that is the defensive intensity. Championships aren't won in November - regardless of the trophy that is up for grabs tonight. But they are won with great defense. This Syracuse team still has a lot of growth to make, but they can build on the foundation of that great defense. This could be a very exciting season.
Posted by TheFanBlog at 8:06 AM