Breaking down the Roster 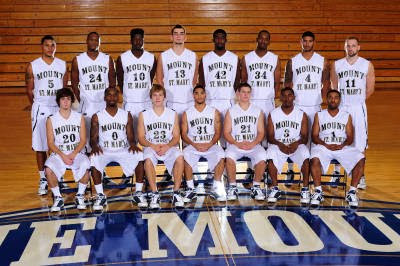 Here is my take on what we can expect from the Mountaineers roster this season. Obviously there will be surprises, but I'm trying to give you my feel on how this team shapes up.

#0 Jean Cajou - The junior guard is the lockdown defender on this team. It's hard to imagine that there is someone better in the NEC. For that matter he is one of the better anywhere. On top of that he possesses a good jump shot and an ability to score points. I like his jump shot when he's set to shoot, and just looking at it, but he can score off the dribble as well. Very athletic and a wise player on the court. He'll be looked upon to score, defend and provide leadership.

#1 Jeremy Goode - My biggest disappointment from the All-Century Mountaineer team was that Goode wasn't a part of it. Clearly he's one of the top players to ever wear the white and blue. He led his team to the tourney in his sophomore year, and back to the postseason last year. Barring the unforseeable, he will leave as the all-time assists leader, in the top five in scoring and most likely second in steals. He has been the heartbeat of the team, since he took over the starting job two games into his freshman year. Poised to have a great senior season, I don't think he'll disappoint.

#3 David Golladay - How much we see of this freshman this year remains to be seen? He will be playing behind a lot of upperclassmen, but he has the athletic ability to make an impact at this level. I think it is going to be difficult to get him a lot of minutes this year, but I would expect quality production when he's in there.

#4 Kelly Beidler - The wing can do a little bit of everything for the Mount. He's an underrated defender, and he rebounds very well with his athleticness and wingspan. He can score points in bunches as well. Can go both inside and outside to do it. Expect a big senior season from Beidler.

#5 Pierre Brown - I think Pierre was one of the surprises last season. Not a lot was expected from him after limited minutes as a freshman. But he improved dramatically and he provided quality minutes down the stretch. He has great athleticism on the wing and his jump shot needs to be respected. He's still going to work from off the bench, but he can give Coach Brown solid minutes when they are needed.

#10 Shawn Atupem - Was the Mount's best inside offensive option last year, when he came off the bench. He's going to start this year and he seems to have improved his game from last year. How much he rebounds is going to be a big question? The Mount needs to replace the rebounding of the departed Sam Atupem and Markus Mitchell, but there aren't too many in the NEC with his size and offensive skillset.

#11 Will Holland - Has sort of been forgotten in the offseason and all the preseason publications. But let's not forget how important he was to this team as a sophomore. He needs to make the open jumpers, and he did in the Blue White scrimmage. But that needs to carry over to the regular season. We hope he returns to his sophomore shooting form. We have a good feeling that he will.

#13 Kristijan Krajina - The late signee is still getting back into shape after missing most of his senior high school season with a knee injury. But he's got a silky smooth jump shot with extended range. He could push for a starting slot sooner if not later.

#20 Kevin Jones - The walk-on is strictly a reserve for the Mount.

#21 Oliver Brown - Another walk-on who likely isn't going to see much action this year. However, he's got good size and could be a factor later in his career if his game develops.

#23 Mike Harvey - The walk-on from Bermudian could help a lot of college programs. Not sure if he can do it at this level. But he's got a good game and may find some minutes sometime if he continues to develop.

#24 Jacolby Wells - After redshirting last year, we won't see Wells until at least the second semester. He is an athletic 6-7, but not sure how polished he is offensively. Still he could help the team on the glass and defensively if he gets his academic situation in order.

#31 Lamar Trice - Until the Blue White scrimmage, I didn't have a lot of expectation for the sophomore from Philly. I figured he could spell Goode for the the three or four minutes he needed off the floor each game. But he impressed me tremendously in that intrasquad and I'm interested to see his role and how he develops this year.

#34 - Tayvon Jackson - He is another contender for that final starting position. I think he can help this team defensively. But he's got to do a better job controlling the boards and scoring some points. But there were moments last year when he gave the team a real boost. Now can he do that in extended minutes.

#42 - Danny Thompson - Injuries have pretty much derailed him the last two seasons. He is also a contender for the final starting slot. He has great potential and could be a surprise to many this season.
Posted by TheFanBlog at 7:42 PM