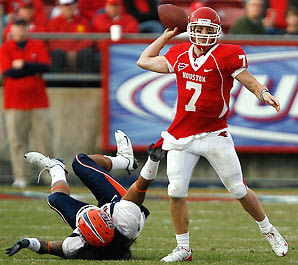 Certainly it's not over yet...there are still 2 NFL games - and good ones at that - and an NCAA (bettor's special) to be played. And even though I didn't spend the entire weekend in front of the TV, there was plenty of time to watch football. And I did.

Best Game of the Weekend - By far Houston's stunning come from behind win at Tulsa was the most entertaining. It made what looked like a dreary Saturday night of games come alive. We know Houston has a great offense and Tulsa has lit up a few scoreboards in the their day. So it was entertaining to see them both square off. Houston kept trying to erase an early deficit but Tulsa also seemed to have a counterpunch to the Cougars' offensive assault. Still trailing by 8 when they got the ball back with about 2 minutes left, it seemed as if the Cougs had one last chance to score, get the conversion and force overtime. They drove the field and Case Keenum threw his third touchdown pass of the night to James Cleveland to draw Houston within two with 21 seconds left. Tulsa dumped Keenum on the conversion and it looked like it had escaped. But Houston recovered the onside kick and Keenum got the final of his 522 yards on a completion down the middle, which set up freshman Matt Hogan for a 51-yard attempt to win it. Hogan drilled it straight through and the comeback was complete.

The Orange - Fact of the matter is, I think Pittsburgh is probably the best team Syracuse has played this year. At least the best team from Pennsylvania. And certainly the most balanced team the Orange has faced. So I didn't have very high expectations for this trip to Heinz Field. And I was pretty accurate in my assesment. Although, I still liked the heart and compassion that this team played with and I think it is entirely possible that they could win the final three games of the campaign. That may be a stretch. But I don't expect them to be overmatched in any of those games. The effort from the team is to be commended. Delone Carter impressed quite a few on Saturday, and its nice to see him have some success. You always have to wonder how good he might have been. Or how good he still might get as that hip recovers.

Giant Problems - I was pretty shocked that the Giants got beat on Sunday. Actually extremely shocked. I just didn't have that much belief that the Chargers were any good. And maybe they are not. But Philip Rivers showed a lot of courage after throwing the interception that should have salted the game for the Giants, by leading his team back down the field to the victory. New York got way too conservative, trying to beat the clock instead of the Chargers. It was obvious before the third down play, that no matter what happened on that play, San Diego was going to have enough clock to mount a drive. So the Giant coaching staff should have played for the touchdown and then San Diego would have had virtually no chance to win the game. They scored on a Rivers touchdown pass with 21 seconds left and won 21-20. That is four straight losses for the G-Men who are in deep trouble entering their bye week.

Stanford drills the Ducks - For me this - and the Northwestern win against Iowa - were what make college football so great. Because in any other sport those two losses would have been virtually insignigicant. Both Oregon and Iowa would be headed to a postseason tournament if there was one. But since there isn't their dreams of a national (BCS) championship are done. Oregon's might have been done anyhow. And the thing about it is, playing road games in college football are difficult. I realize Iowa's was at home. Particularly, conference road games in November. It was no surprise to me that Stanford won. Although, I didn't expect them to score 50 points. But with Toby Gerhart running the football and Oliver Luck (the former West Virginia Mountaineer)'s son throwing it, that is a pretty good team. And you had to figure that Oregon might have been a little high after scorching USC last weekend.

PAC-10 officials armband - Anyone have the scoop on what the blue armband was that PAC-10 officials were wearing this week. At least the referee was wearing it in two different PAC 10 games I watched. Can't find the answer via any search. I thought the first guy had a broken arm - but it couldn't have been that much of a coincidence.