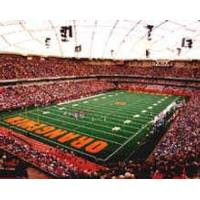 Maybe I don't have the right to say what I'm going to say.

Maybe the fact that I didn't attend a Syracuse home game during the Greg Robinson era has taken away that right.

Maybe the fact that I was a Coach P supporter until Darryl Gross decided he knew more about football than the previous Coach makes my opinion on this mute.

Maybe the fact that I haven't jumped totally back on the bandwagon and journeyed the 290.73 miles from my front door to the Carrier Dome to see Coach Marrone and his team keeps my voice from meaning anything.

It's not an unusual feeling if you are a Syracuse football fan. The last four and a half years were a nightmare. There were plenty of uninispiring embarrassing moments.

Most of it seemed to be a result of the emotionless, uninspiring leadership. The loose ship. The fall from glory. The fact that Louisville was the only conference team we mustered a win against, and for that matter were even really close.

But change came. Maybe it wasn't the big flashy name hiring that many expected or desired.

But Marrone was one of our guys. And he stood up and said, being an Alum the last few years was hard. Watching the program that meant so much struggle was troubling.

He made it our team again. He promised effort and desire. He said it started now.

This group, this team of young men has made Syracuse Saturday football exciting again. It has started.

They have made that effort for us. The fans. The Alums. Those who bleed Orange.

They've garnered the respect of their opponents back. They've come prepared to play. They've outworked some, they've outhustled, they've even outplayed some.

They have done that for themselves. But they have also done it for us.

And we have failed them.

The Student section was half empty or more against a Top 5 opponent on Saturday. There were more empty seats in the Carrier Dome than at some Lacrosse games.

And even worse some of those who showed up booed the effort. Booed the decision making. Booed the mistakes.

Boo lack of effort. Boo non-hustle. Boo the AD for putting us in the position that we are in. And maybe that is what you are doing. But it isn't the image that is being portrayed.

Don't boo Marrone, and don't boo the Student-athletes who are working hard on a daily basis to try to make things better for you.

Those are the guys who are showing the future of the Syracuse football program what it will take to earn those championships. The fame and the championships won't come for them. But they'll be a part of all of it. They'll be the foundation to the restoration.

We won't have the opportunity to thank them at that time for their efforts. They will quickly be forgotten when the sun rises again. But they hold the key and they are putting forth great effort to help get us there.

This team isn't embarrassing, the boos are.
Posted by TheFanBlog at 12:37 PM