Back to the Capital 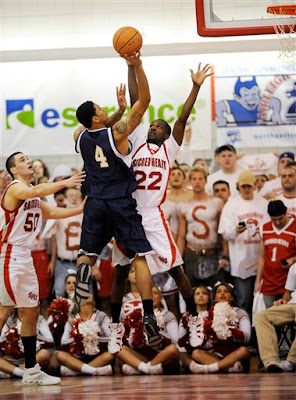 What's at stake?: Both teams are still looking for their first wins of the season. Both entered with high expectations, American off of a 2nd consecutive Patriot League crown, and the Mount with a senior laden roster that wants to get back to the Big Dance.
When is tipoff?: Wednesday evening at 7:30.

Where is the game?: at American's Bender Arena. The Mount handed AU its only loss on that floor a year ago, but the Eagles fell on Monday night to Albany at home, so that total has already been matched this season. If you can't get to the game, their will be an internet stream available at AU's website. Radio coverage available on the Mount Radio Network, 1450AM WTHU.
The Analysis: This has been a pretty good regional mid-major rivalry the last few years. American has had the better of the series of late, minus the Mount's win last year. I think American realizes it is not the favorite this year, and wouldn't come to Knott Arena as the series was up for renewal as a result. Makes a lot of sense as AU doesn't have the experience it had in years past. The Mount is chock full of experience, and had four players in double figures in the season opening loss to Oklahoma. Jeremy Goode had a huge game to lead the Mount to victory last season in this duel. He led the Mount with 18 in the opener. The Mount will be looking to get production out of all its players.
Advantages for Mt. St. Mary's: The experience that this team has should be crucial in this game. Particularly in the backcourt with Goode, Cajou and Holland, as American has some new guards. Also I think the Mount's athleticism up front, could lead to big games from Kelly Beidler and Shawn Atupem.
Advantages for American: The Eagles didn't want to surrender the home court here for a reason. Bender Arena is a tough place to play. I also think that AU getting back on the floor on Monday night will have helped this team. It sounds like Jeff Jones was much more pleased with the effort than in the opening loss to St. Francis (PA). The Red Flash did respond with a good effort at Notre Dame, so that loss might not have been as bad as first thought. The Eagles have always played tough defense under Jones and you can't expect that to be any different.
What to expect?: The Mount needs to play at its best to get a win here. Road games are never easy. Especially against top notch competition. The Mount needs to build on the effort from Norman and put together 40 minutes of solid basketball. American will likely try to control the game defensively keep it in slow down mode and try to win it in the upper 50's or lower 60's. We know that the Mount's offense is more efficient on the move. Oklahoma talked about how its transition defense made a key difference on Saturday. The Mount must rebound better and get some easy buckets. I expect a war. But I expect the Mount to prevail. Let's take the Mount 74-66.
Albany recap
Posted by TheFanBlog at 5:41 PM